So, here’s the real story, and don’t let Bill or Karen tell you differently.

A while back, I was living on my own and had my eye on a plump little finch at a backyard bird feeder. But this guy (found out later he was named Bill) came out the back door, scared off my lunch, and pretty well pissed me off.
So I split. Stupid human! 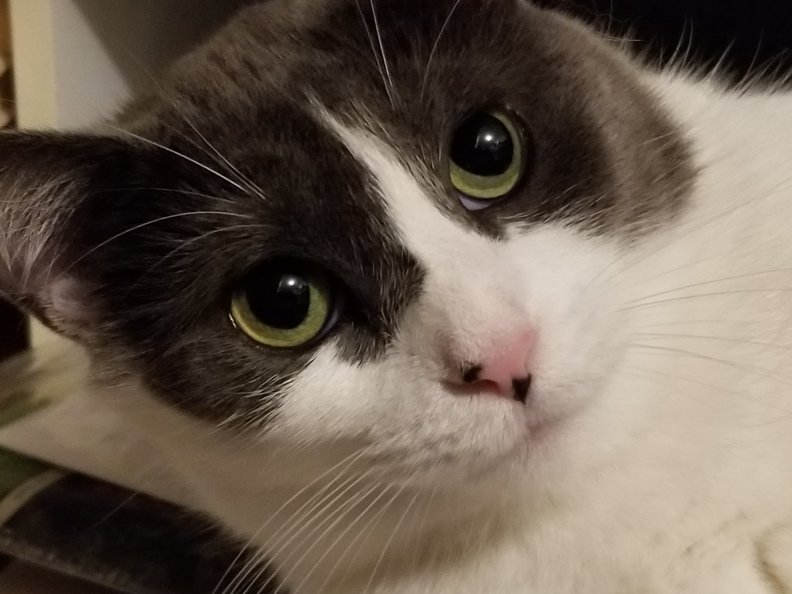 But I kept running into him and this nice lady (lots nicer than Bill) since she fed the birds who fed me. You know, the old circle of life thing. Then they started leaving brown chunks that looked like rabbit turds but tasted like fish on their deck, so I helped myself and even started sleeping under their deck.

One thing led to another, and I kinda started to like Karen and maybe even Bill a little bit … but I kept my distance. The only people I had ever known tossed me out of a car and left me, so humans were kinda low on my trust meter.

Eventually, they quit calling me kitty cat and instead called me Gandolf. I was pretty upset. I like wizards as much as the next cat, but fer cryin out loud I’m a girl! I guess the cats that kept eyeing me from the window didn’t tell them, but as long as the fish turds and wren feathers held up I decided to ride the Gandolf train.

It got cold and rainy in the fall, and once or twice I let the humans tickle my ears. Just tossing them a bone, ya know, so they’d keep the grub coming.

Second time that happened was the first time Bill said anything smart to me. I could tell he didn’t want to hurt me. So I went for it: Purred like a 35-pound lynx, rolled over on my back, and dared him to rub my belly.

Can’t repeat what I meowed back at him, but then he made an official sounding comment: “All right then, we’ll make it Gandy. You OK with that?”

I was thrilled. I liked the name, so I sank my claws into his arm and bit his thumb to express my pleasure. I can’t repeat what he said back to me, but it was love…I let him carry me into my first house.

“I’m Gandy,” I growled at the three cats checking me out. “I may be small, but I’ll kill you if I have to.”

They laughed and that was that. I was three months old and I had a home and instant family.

I got extra rations and a big fireworks show just for me. And Karen told me I’m 2 years old. Whoopppeee!!!!

Happy birthday to me, and thanks for all the cards, America. You’re ok for a bunch of upright-walking omnivores!